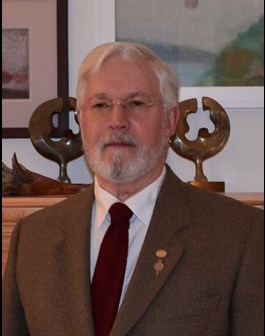 The American Board of Orthodontics (ABO) awarded the Albert H. Ketcham Memorial Award, its highest honor, to Michael L. Riolo, D.D.S., M.S., of Seattle, Wash., on Sunday, May 5 at the Excellence in Orthodontics Luncheon and Awards Ceremony, which was held in conjunction with the 2019 Annual Session of the American Association of Orthodontists (AAO) in Los Angeles, Calif.

The Albert H. Ketcham Memorial Award commemorates the achievements of Dr. Albert H. Ketcham. Created by The ABO in 1936, this award is presented annually to an individual who has made a notable contribution to the science and art of orthodontics.

On receiving the award, Dr. Riolo said, “I am honored and pleased to receive the A.H. Ketcham Award. None of my professional achievements would have been possible without the help I received from my mentors. While clinical practice was always very gratifying, the most rewarding and productive experiences during my career have always been associated with being mentored or mentoring others, as well as being involved with the ABO and the AAO.”

Over his career, Dr. Riolo has been principal investigator or co-investigator on five National Institutes of Health-funded studies; authored or co-authored over 25 books, chapters, monographs and other educational materials; and published over 50 articles in peer-reviewed journals.

Dr. Riolo served as ABO president in the 2004-2005 year and was a member of the board of directors from 1997-2005. In addition, he has served as an ABO examiner. He was honored by the ABO with the Earl E. and Wilma S. Shepard Distinguished Service Award in 2017.

He believes strongly in the ABO and the importance of board certification: “The process of becoming board certified gives us the opportunity to look carefully at what skills we have and what needs to be improved. Everyone who is board certified is better because of the process. Certification protects the public and helps to improve care for all patients,” he said.

In addition to his involvement in the ABO, Dr. Riolo is a past president and board member of the Michigan Association of Orthodontists, as well as a past board member of the Edward H. Angle Society of Orthodontists, Midwest Component. He has served as chairman of the orthodontic section of the American Association of Dental Schools. Dr. Riolo served on the Council on Dental Education as well as the Orthodontic Site Visit Report Review Committee for the Commission on Dental Accreditation (CODA) and as an orthodontic site visitor for CODA.