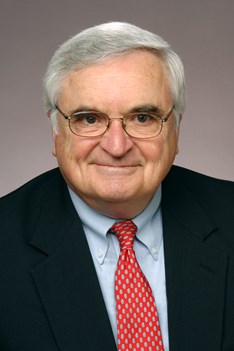 The American Board of Orthodontics (ABO) awarded the Albert H. Ketcham Memorial Award, its highest honor, to Dr. John S. Casko of Iowa City, Iowa, on Sunday, April 27 at the Excellence in Orthodontics Awards Ceremony, which was held in conjunction with the 2014 Annual Session of the American Association of Orthodontists (AAO) in New Orleans, La.

Dr. Casko, a past president of the ABO, is Professor Emeritus and the B.F. and Helen E. Dewel Endowed Chair in Clinical Orthodontics Emeritus at the University of Iowa.

“The ABO is very pleased to recognize Dr. Casko with this prestigious award,” said Dr. Marvin Kastrop, the 2013-2014 president of the ABO. “Dr. Casko has contributed greatly to the specialty of orthodontics. Drawn to teaching from the beginning of his career, Dr. Casko has influenced more than 230 orthodontists who graduated from the University of Iowa. He has said that his greatest satisfaction is seeing how successful his residents have become and how much they contribute back to dentistry and the specialty of orthodontics. In addition, his sphere of influence extends beyond the University of Iowa. Many orthodontists from all over the world have benefited from his life’s work. The Ketcham Award recognizes his dedication to the specialty.”

Dr. Casko received both his D.D.S. and M.S. in orthodontics from Georgetown University in 1964 and 1968, respectively. He earned a Ph.D. from the University of Pittsburgh in 1971. He has been an ABO Diplomate since 1981 and recertified in 1999.

Dr. Casko is a member and past president of the Angle Midwest Component of the Edward H. Angle Society of Orthodontists. He is a fellow of the American College of Dentists and editor of Practical Reviews in Orthodontics.

During his career in orthodontic education, Dr. Casko gave more than 200 orthodontic presentations nationally and internationally, taught more than 230 orthodontic residents and received numerous awards. He is the Orthodontic Education and Research Foundation 2004 Merit Award recipient. In 2006, he was named the University of Indiana Jarabak Scholar. He received the Louise Ada Jarabak Memorial International Orthodontic Teachers and Research Award from the American Association of Orthodontists Foundation in 2008. In 2009, the Southern Association of Orthodontists presented him with the Orthodontic Legend Award in recognition of his extraordinary achievements in orthodontic education through teaching, research and publishing.

“This is the highest award I can get as an orthodontist, and it is very special to me because of that and because it symbolizes the recognition of my peers,” Dr. Casko said. “This award is a wonderful complement to the Louise Ada Jarabak Memorial International Orthodontic Teachers and Research Award that I received in 2008.

“To be included on the list of past recipients of the Ketcham Award is incredibly humbling. This list also brings to mind friends and colleagues who received this award, but are no longer with us. I am the second Iowan to receive this award. The first person was Dr. Tod Dewel to whom I was very close. His estate was used to establish the B.F. and Helen E. Dewel Endowed Chair in Clinical Orthodontics in the Department of Orthodontics at the University of Iowa, and I was the first person to hold that chair. This award also makes me think of Dr. Dale Wade, a past president of the ABO. We served together as directors to the ABO. When he passed away, the ABO gave the award to him posthumously. I was president of the ABO at the time and presented the award to his wife, Jan. So many wonderful people have received this award; I am grateful to be included among them.”

"Receiving the Ketcham Award is a humbling experience,” Dr. Kokich said. “What an honor it is for me to have my name added to the list of notable individuals who have received this recognition over the past 75 years. I thank the American Board of Orthodontics for this tremendous distinction and also for their dedication in elevating the level of excellence practiced by orthodontists throughout North America and in other parts of the world."